An early lumberman named Matthew Cobb built the first mill on the banks of Pere Marquette Lake.  When a fire broke out, it was obvious that there was a need for a fire department.  Cobb organized the first local department.  Equipment consisted of a few buckets, axes, shovels and a row of wooden barrels filled with water and placed along the roof of the mill.

Eight years after the City of Ludington was formed, a fire broke out in the city and consumed 67 buildings including the fire station.  As a result of the “big fire”, a water plant and a system of mains to carry water throughout the city was constructed.  In 1883, a city hall was built which included the first department named the Phoenix Hose Company #1.  A second division was organized in 1884 in the Fourth Ward, and was named the Phoenix Hose Company #2.  Members of each division wore distinctive and colorful uniforms.

Mr. Mike McDonald, a member of the Ludington Fire Department, for many years, loans the fire engine on display at the village to us.  The fire engine is a 1928 Boyer Fire Apparatus mounted on a Graham Brothers chassis.  The engine has been out of service for over 40 years. 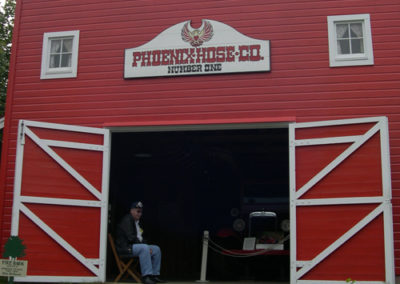