This original log cabin was the first authorized post office in Mason County.  It was originally a combination home and post office and was built as early as 1850.  William Quevillon (Ku-vee-aw), who first came to this area as a trapper, built this cabin on one of his hunting trips.  In 1852 Quevillon brought his wife and their four children on a horse drawn scow, along the beach from Grand Haven to this log cabin.

Quevillon was appointed postmaster in 1855 and served in that capacity for 18 years.  Postage on a letter from Grand Haven to Fairview (located just south of here in those days) was 50 cents and mail was delivered four times a year!

This cabin was moved intact (minus the fireplace) to White Pine Village in 1968.  The fireplace was rebuilt, using all local fieldstones. 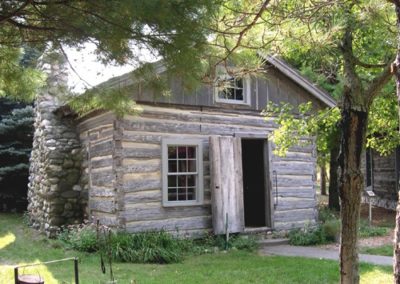